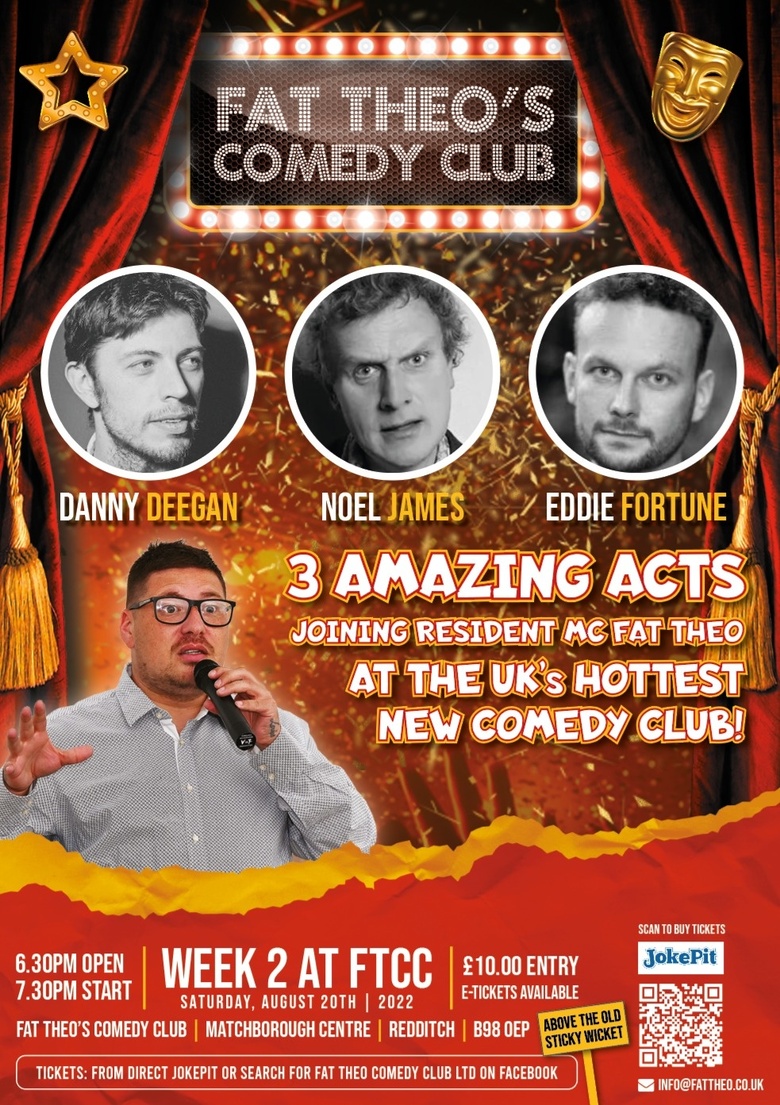 Saturday 20th August…
Danny Deegan: With the confidence and swagger that you might expect of a North-West comedian at the very top of his game, Danny Deegan is a comedian, writer and actor who has become a regular at most of the major comedy clubs in the UK since he began performing in 2003.Danny’s tales of mischief and the characters he creates have kept audiences all over the country enthralled as he weaves in and out of the people he has met traveling. His talent and likability coupled with his confidence make him one of the most popular acts in the North, a master at dealing with a tough crowd, and an act that promoters always turn to when booking gigs.Danny is a seasoned headliner and MC, with credits including work for promoters such as Off The Kerb, The Glee, Ten Feet Tall, Frog & Bucket, CKP, The Stand and Avalon.Danny also recently performed a headline set at the Green Man festival in South Wales getting a great reception from the 400 people in the comedy tent and being asked to wrap up for Manchester band “The Doves” after their headline set in front of 12,000 people.Away from live work, Danny has made several radio appearances, from being a guest on Radio GMR to having his own show “Afternoons with Danny Deegan” on CAT FM in Crewe, whilst his TV credits include appearances on “Made in the North” and “The Adam and Shelley Show” to name but two.Danny has also also provided tour support for Chris Ramsey, Mick Foley, Dave Spikey & Paul Sinha as well as performing in Switzerland.
Eddie Fortune is a Liverpool based comic described as a comedic Tornado, talking about the woes of dating, work life and the need to stay in shape, he occasionally mistakes himself as a Julia Roberts from pretty woman. His act can be a gag a second or an existential monologue, poem or song. Displaying a contradictory self deprecating confidence, and heckling the audience with beautiful compliments, Eddie is also a Theatre Producer for Crumbs Theatre, Liverpool.
Noel James' credits are too numerous to list in full so we asked him to write his own biography to give you an idea how this bizarre mans brain ticks."My name is Infact Noel James, although I never pronounce the Infact…" These are the first words of Infact Noel James' act - an act which, dare I say, confounds even his closest psychopathic hangers-on. For eight years, Noel has performed comedy throughout the UK. He does it for a living and has performed at all the major clubs and festivals. Glastonbury, Reading, Edinburgh to name but three.Before entering showbiz old Noel tried his hand at teaching. Without much success, he taught English as a foreign language: he taught it as Welsh! WELSH - Old English translation meaning 'Foreign' The above definition gains significance when you perceive his lilting delivery.Not only does it have totally tropical taste and perfect timing but indeed it stems from his mouth which has its dark origins firmly rooted in that far-off land called Wales. As you will see, the rest of his body has no fixed abode but its amazing what a transplant operation can do. But not for him the comedy of stereotyping - he finds it all too easy. Well, he is a Capricorn (near the Sagittarius end which makes him a Saggycorn)- His act is gag, gag, gag all the way - though some of it consists of non-baby-talk.Above all, his act is highly original; the guy who wrote it assured him of this. Surreal, bizarre, absurd, intelligent, and yet, somehow strangely attractive. No, seriously he is a very accessible act who generally goes down well anywhere.TV Credits worth mentioning include: Packing Them in -Channel 4 The Stand-up Show -BBC Giamocs -S4C The last one you may not have heard of. It was a Welsh language Show which Noel Co-wrote and starred in and it got nominated for the Rose of Montreauxoxex (and that's true).He's also done a bit of serious acting, and as for music! Well, what he does is throw in a bit of guitar playing and singing, of a sort, as well as a few prop gags. I'm telling you, this man is so spontaneous he'd combust if it didn't ruin his shirt! He's really funny.

Age Restrictions:
Over 18s only.

There are currently no available tickets for this event.

Reviews for this event

Really made to feel welcome. Great night, lovely venue, cheap alcohol! We will be back!